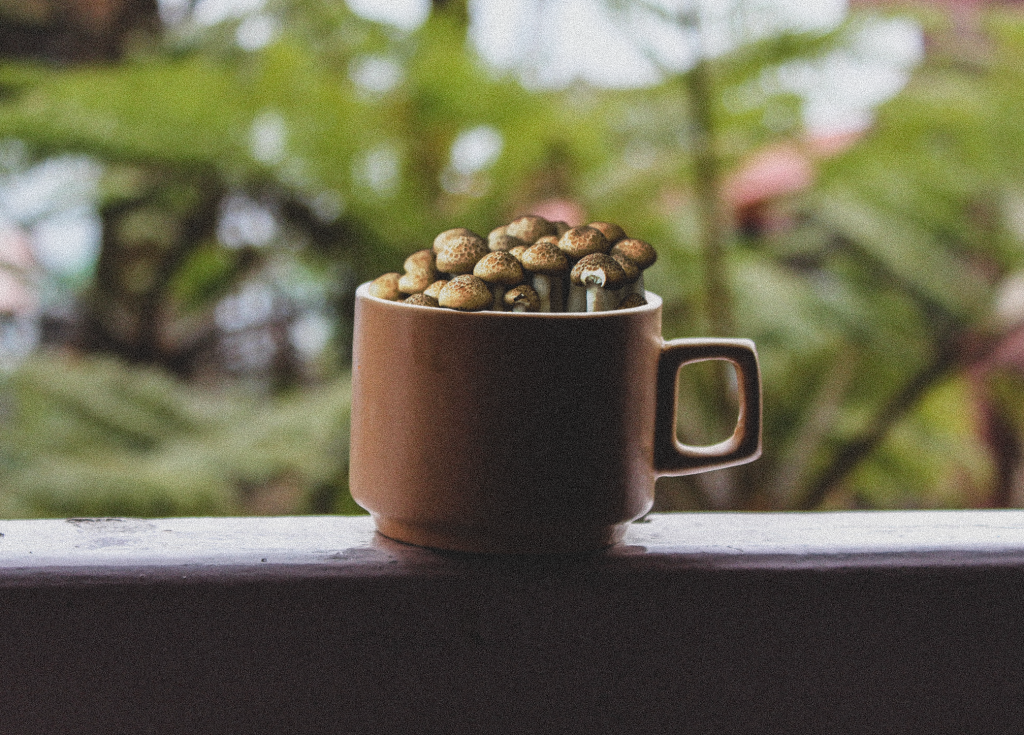 When it comes to psychedelic mushrooms, sometimes just enough of a good thing can be a little too much. For those who have experienced magical fungi in their whole form, it’s no secret they can taste like the ground (or tree) from which they came and cause mild-to-massive nausea. Fortunately, these less-than-desirable outcomes are not a required rite of passage. People can garner the effects of this expansive psychedelic while preventing stomach churns, feeling the effects more quickly, and realizing multiple benefits from added plant compounds. The method is mushroom tea.
Why People Prefer Drinking Mushrooms
Most people consume psychedelic mushrooms in their complete form, and not everyone cringes at the flavor and aroma. In fact, some prefer eating magic mushrooms because they don’t mind the taste and like the long-lasting effects they offer through slow digestion. But many others prefer an alternative route to a similar psychedelic destination.
Magic mushroom tea is increasingly popular because it tastes better, acts faster, subsides quicker, reduces nausea, and adds therapeutic ingredients to the mix. People brew psilocybin mushrooms in their favorite herbal or caffeinated blends like hibiscus, licorice, chai, and green tea. To top it off, some even add flavor-enhancers like honey, milk, or lemon.
People who brew shroom tea gain various added benefits as a byproduct because grinding up mushrooms and steeping them in hot water creates extracts that yield up to 400 active ingredients. Simultaneously, grinding up mushrooms creates a fine powder that allows the infusion to act faster and feel even more potent. Why? Fine powder increases the mushroom’s surface area, enabling the gastrointestinal system to absorb more of the substance more quickly. In contrast, whole dried mushrooms have less surface area, which forces the stomach to spend more time breaking them down while losing some of the psilocin in the process.

Types of Mushroom Tea
People make mushroom tea using nearly any psychedelic mushroom in herbal or caffeinated tea, and optional add-ons like lemon peels, orange juice, vanilla, or coconut milk. The most popular psychedelic variety is Psilocybe cubensis. But psilocybin mushrooms certainly aren’t the only type of fungus fit for home brewing.
In fact, ancient Chinese, Japanese, Greek, and Russian medicines integrate medicinal mushrooms like shiitake, maitake, Lion’s Mane, cordyceps, and chaga into teas to heal ailments ranging from infections to cancer. Fast forward to today, where Western cultures have embraced such adaptogenic mushrooms in pursuit of optimal wellness. One must look no further than Whole Foods to find bags of powdered mushroom extract blended with various teas from ginseng to chai.
Benefits of Mushroom Tea
The benefits of mushroom tea range depending on their ingredients and the intention of the person who prepares it. Medicinal adaptogenic mushrooms reportedly help the body adapt to stress and regain balance, and have been used in traditional Eastern medicine to fight disease for centuries. That said, Western science is a bit more tempered in its beliefs about mushrooms’ clinical value.
Human clinical research does not back specific disease-fighting claims, but most researchers agree medicinal mushrooms are potent antioxidants that effectively fight inflammation—the root cause of most ailments. Adaptogenic mushrooms like Lion’s Mane, maitake, and cordyceps also help calm the nervous system, promote homeostasis, and reduce environmental stress.
When it comes to magic mushroom tea, the benefits are a bit more ethereal. For some people, the psychedelic experience may zap them into the present moment, allowing them to perceive memories and relationships in entirely different ways. Others may have a more hallucinogenic experience that helps clear their mind after the journey subsides. Ultimately, a magic mushroom’s physiological strength derives from its ability to change one’s mind and feeling state by creating new neural connections. When steeped in hot water with therapeutic herbs like calming lavender or energizing green tea, magic mushrooms may deliver additional synergistic effects.

The History of Magic & Medicinal Mushroom Use
Mushroom tea is a relatively new psilocybin delivery method, but psychedelic mushrooms have been around since pre-biblical times. In fact, Australian cave paintings from 10,000 BC and North African and European murals from 9,000 BC allude to their use. Centuries later, the Maya and Aztec peoples were known to ingest hallucinogens called Teonanácatl, “the flesh of the gods”, which many believe to be magic mushrooms. Indigenous tribes in Siberia ate a particular red and white spotted hallucinogenic mushroom called Amanita muscaria to help them transcend their physical bodies. Ancient Greek cults worshipping the goddess Demeter held ceremonies with a brew consisting of Ergot fungus, Psilocybe mushrooms, and Amanita muscaria mushrooms.
Ancient healers have also been using mushrooms as medicine since 450 BC, from Hippocrates to the Chinese alchemist Tao Hongjing in the 5th century. Ötzi, the IceMan, who lived nearly 5,300 years ago, reportedly carried mushrooms to survive the Alps of northern Italy; and North American indigenous people used puffball mushrooms to heal wounds. Modern medicine is just starting to discover the mechanisms that make these medicinal fungi effective at boosting the immune system and staving off disease-inducing stress.
Reishi Mushroom Tea
Reishi’s reputation dates back to 200 AD as an Herb of Spiritual Potency in the Chinese medicine text known as the Shen Nong Ben Cao. According to the book, “Long term consumption of reishi mushroom will lighten the body and prevent aging, extend one’s life, and make one an immortal.” Taking those assertions down a few (hundred notches), the Journal of Ethnopharmacology researchers found that reishi adaptogens hold significant antioxidant properties and anti-cancer potential. Known for a bitter, tree bark flavor, reishi mushrooms pair well with chai tea spices.
Chaga Mushroom Tea
Chaga mushrooms grow on hardwood trees in the cold forests of Russia, Korea, Japan, the US, and Canada. They have been cultivated by indigenous Siberians and brewed in tea since the 13th century. Known as the Herb of Kings or Gift from God, chaga helped ancient Russian and Siberians fight infections and was used in ritual cleansing ceremonies. More recently, animal and lab studies show chaga mushrooms could reduce fatigue and inflammation, fight bacterial infections, and increase mental clarity, although clinical trials are needed to prove such assertions. Since chaga produces trace amounts of vanilla bean fragrance, most chaga mushroom tea recipes include vanilla bean, vanilla stevia, or an alternative vanilla sweetener.
Cordyceps Mushroom Tea
Cordyceps is a parasitic fungus and potent antioxidant whose most well-known species, Cordyceps sinensis, is generally found in Asia’s high altitude regions like the Himalayan Mountains. As a prescribed medicine in ancient Chinese and Tibetan medical books, cordyceps is a rare fungus that is known for killing insects and growing out of their bodies, and is traditionally used to treat 21 different ailments. Returning to recent history, a 2014 animal study found that cordyceps extracts drastically reduced blood glucose and cholesterol levels. In some human clinical trials, cordyceps sinensis helped target cardiovascular and immunological disorders as well. Cordyceps mushrooms may pair with any preferred coffee or tea and optional sweetener.
Magic Mushroom Tea Recipe
Psychoactive mushroom tea is an easy-to-digest concoction that allows herbs to synergize with psilocybin extracts in a deliciously mind-opening brew. The best part is anyone can make shroom tea with grocery store ingredients and basic kitchen tools like a coffee grinder, teapot, and strainer.
For psychedelic mushroom tea enthusiasts, the process of breaking up psilocybin mushrooms and steeping them in their favorite herbal tea blend is a ceremonial undertaking that helps prepare them to embrace the journey consciously.

Easy Shroom Tea Recipe, Even First-Time Baristas Can Make
Start by grinding the preferred dose of dried mushrooms into a fine powder using a cannabis grinder or coffee grinder. (It’s best to grind 15-30 minutes before you plan to ingest it so the powder doesn’t float into the air when you open the grinder.) If a grinder is unavailable, finely chop the mushrooms with a sharp knife.
Get creative by choosing any herbal or caffeinated tea, such as energizing green tea or calming chamomile tea. Set two tea bags aside.
Chop up an optional portion of ginger or mint to help reduce nausea. Lavender may also work and pairs perfectly with chamomile.
Heat water (approximately one cup of water per serving) in a teapot to about 190 degrees Fahrenheit. Boiling water is ok, too. Then reduce heat to low.
Add ingredients from steps one through three into the teapot, and let the brew simmer for about 15 minutes. Increase to 30 minutes to strengthen the effects.
Strain the liquid into a cup, taste it, and add a sweetener like honey, or vanilla stevia, if desired.
Sip and enjoy!
Mushroom Lemon Tek
Another alternative to eating magic mushrooms in their whole form, which can be challenging to digest and harder on the stomach, is the lemon tek method. Similar to mushroom tea, lemon tek can make the psychedelic experience arise faster, causing it to feel more intense and subside a bit quicker. But lemon tekking intensifies the experience even more than mushroom tea by adding citric acid to the mix. When mushroom powder sits in lemon juice for 15-20 minutes, the psilocybin, psilocin, and other active compounds become more readily absorbable. As a result, the effects may arise almost instantly for some people. Lemon tek can be consumed as a shot or added to a cup of tea for better taste and slightly slower absorption.
Mushroom Tea Side Effects
Medicinal mushroom tea is considered a superfood supplement with enormous health benefits. But mushrooms are also fungi containing hundreds of active ingredients that could negatively interact with prescription medications. Chaga, for instance, is high in oxalates which can reduce mineral absorption at high doses. Other mushrooms may have blood-thinning effects. That’s why it’s essential to research all mushroom strains and consider speaking with an expert about potential adverse results.
Magic mushroom teas are typically safe and 100% non-addictive, but they’re not without potential adverse effects. Remember, teas absorb quickly and tend to cause a more robust experience. This can be overwhelming for people who don’t expect such intensity. That’s why it’s so important to start with a low dose, perhaps a microdose for the first time, to ensure a smooth and seamless experience. And remember, mushroom tea is only meant for drinking.
If you have the urge to inject yourself with mushroom tea, fight it at all costs.

Once you’ve finished mastering how to make mushroom tea, learn how to maximize mushrooms by attending our Microdosing Course. We’ll guide you through the basics—then dive much deeper, helping you tailor your routine to meet your personal goals.
All artwork created by Shea Jozana (@gaiafightsback)
This article contains affiliate link(s) from Amazon. Sporestore receives a small percentage of the product price if you purchase through affiliate links.