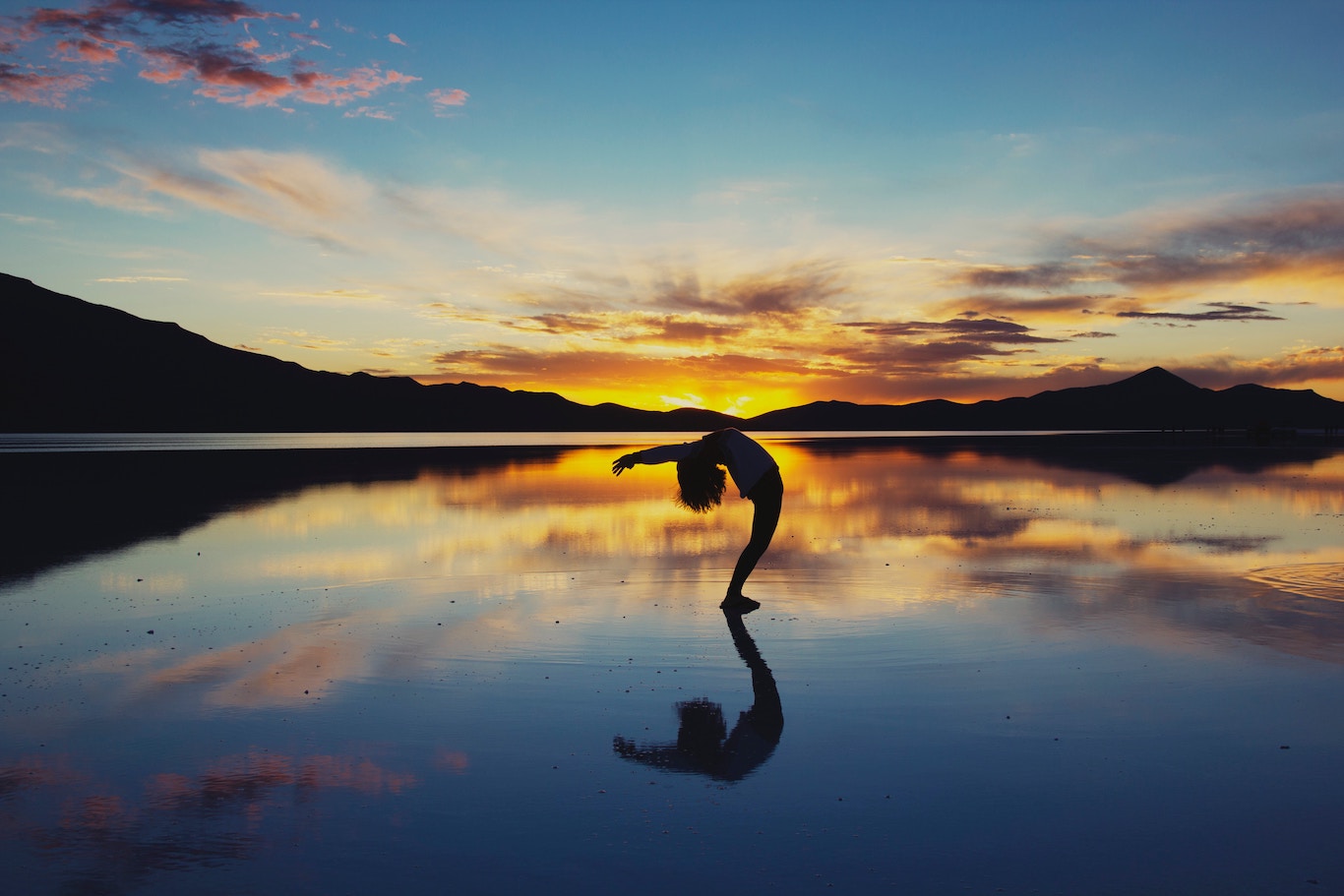 Karina Morgan · June 22nd, 2019
The purpose of traditional yoga is to create an intimate journey into oneself; to cultivate understanding, mindfulness, and a higher consciousness. What other endeavor has an almost identical motivation? The use of psychedelics. Both psychedelics and yoga are used to achieve common goals: to aid in the pursuit of enlightenment; to achieve altered states of consciousness; and to have a higher and healthier sense of self.
Novel academic research is finding that the ancient practice of yoga is not only linked to psychedelic and herbal use, but that there’s evidence that its origins may actually stem from the absence of the psychoactive substances themselves. [1][2]
What was Soma?
In ancient Indian texts, there are many instances of the ritual drink “Soma.” One of these is the Rigveda (one of the four Vedas), a sacred Hindu text of Vedic Sanskrit dating to about 3,500 years ago. The drink is mentioned multiple times throughout the text, particularly in the ninth chapter. In the Vedas, the word “Soma” is used interchangeably for the drink, the plant, and its deity. Soma is described in the Rigveda as the sanskrit term “Amrita,” meaning immortality, or the drink of immortality.
These texts have baffled scholars for years, because there is no mention of what Soma actually is. Of course, there are multiple theories. In the 1960s, ethnomycologist Robert Gordon Wasson proposed the idea of Amanita muscaria, a fly-agaric mushroom, as a likely candidate.
Ethnobotanist and frontiersman of psychedelic research Terence McKenna suggested in his book Food of the Gods that the most likely candidate for Soma is the psilocybin-rich Stropharia cubensis, a hallucinogenic mushroom that grows in cow dung. He concluded from his own experiments, which involved ingesting Amanita Muscaria, that it could not have inspired the worship and praise that Soma received. McKenna also states that in the Soma Mandala of the Rigveda there are extensive references to the cow as the embodiment of Soma.

Other theories suggest Soma could be made from cannabis or other herbal plants, but at this point we can only speculate.
Wendy Doniger, an Indologist, notes in her book The Hindus: An Alternate History, that the Vedic Indians lived in the mountains where psychedelic mushrooms were abundant. However, through the course of history, as people moved into the early urban civilizations around the Ganges, there was a notable shift in the texts. Soma was no longer mentioned, conspicuous in its absence.
Interestingly, this is the same time period as when the first evidence of yoga practice came into vogue. Early yogic methods consisted of “kriyas,”or intense breathing exercises, and prolonged meditation. Some scholars believe that these physically demanding aesthetics were meant to substitute the use of Soma, which was no longer available, and produce trance-like, or enlightened states.
These ancient breathing exercises aren’t just a mystic practice of the past, but have actually been studied by LSD researchers and trained psychoanalysts Dr. Stanislav Grof and Christina Grof. After realizing that short, intense breathing exercises helped practitioners transcend consciousness in a similar manner as psychedelics, the Grofs named the techniques “Holotropic Breathwork.” [3]
The Rigveda is not the only ancient text that hints at ingestion of psychoactive substances. The Yoga Sutras, a 1,600 year-old text on the theory and practice of yoga, contains information about obtaining “other states” of mind. “The subtler attainments,” it says, “come with birth or are attained through herbs, mantra, austerities, or concentration.” Many people have drawn the conclusion that the “herbs” were cannabis. Cannabis, or Bhang as they call the edible form in Hindi, has a long history in India. It’s mentioned in writing as early as the Vedas. [4] In these texts, it was considered one of the five sacred plants; it was believed that a guardian angel lived in its leaves.
The Hindu god Shiva is frequently associated with cannabis, and coincidentally, Shiva is also regarded as the patron of yoga and meditation. Today, many Sadhus, holy men of India, use cannabis for spiritual practice and yoga, and consider it an integral part of connecting with the gods.
Kundalini Yoga
Many argue that the modern version of yoga in the West has been sanitized into a multi-billion dollar industry, which is, essentially, the antithesis of traditional yoga values. One branch of yoga that is more aligned with traditional yoga values is Kundalini Yoga. Kundalini is an ancient practice dealing with the transformation and expansion of consciousness by awakening Kundalini, a latent energy in the lower spine, and raising it up through internal energy centers called chakras.
Many modern forms of yoga popular in the West are mainly “asana”- posture-based – but Kundalini yoga has an emphasis on “kriyas,” using these intense breathing techniques to alter consciousness. This is historically more aligned with traditional yoga practices. Similar to experiences with psychoactive substances such as LSD or ayahuasca, it is said that when the Kundalini energy is awakened it can trigger an intense, life-altering energetic event inside of you.
Should I introduce psychedelics into my yoga practice?
This is a deeply personal decision, and will vary from person to person. The symbiotic relationship between psychotropic use and healthy psychological growth is undergoing more and more research. Some yogis claim that yoga practice itself releases energies in your body that are more powerful than any drug, and promote sobriety. Others state that using these substances in tandem produces a synergistic effect and can further one’s energetic journey.[5]
The overarching conclusion from many yoga practitioners is that the use of LSD in yoga can enhance one’s ability to explore the full potential of mind and body. Dosing LSD for yoga and meditation is based on personal experience, but many recommend lower than a recreational dose, but higher than a micro-dose (about 1/4-1/2 of a tab). You want to stimulate the visuals and alter your perception, but still be able to participate and immerse yourself in the practice with a clear head.
Listen to our podcast episode with Matt Cooper talking about: Making Psychedelics Part Of Your Fitness Routine or Click here to read the transcript

How about cannabis?
Due to its newly legalized status in some Western countries, cannabis is seeping into the mainstream. With both the yoga and marijuana industries flourishing, it was only a matter of time until the old friends merged once again in the Western world.
Just like the plants, cannabis-infused yoga classes are sprouting up all over. The instructors of these classes are aware of the ancient practices in the East and the knowledge that cannabis has always been considered a sacred medicinal plant that benefits the mind, body, and spirit. Yogis taking these classes claim that when they are high, it’s easier for them to let regular stresses and thoughts leave their mind, and they are more in tune with their body, allowing for a deeper meditative space.
Another benefit of using cannabis in yoga: It allows people with chronic pain issues to participate, enabling not only the mind but also the physical being.

Just like yoga, not all types of marijuana are the same. Some cannabis strains are more aligned with certain styles of yoga. Hatha and Restorative yoga tend to be gentle, slower, and overall more mellow styles, therefore pairing well with an indica strain. Indica strains are typically thought to be more physically sedating and promote mental and physical relaxation. A sativa strain is preferable for Vinyasa or Ashtanga styles of yoga, where there is a faster flow and more focus on asanas. Kundalini yoga, with the focus on awakening the Kundalini energy, could use either strain based on personal preference.
If you are looking to experiment with cannabis and yoga in a class setting, rather than in just your personal practice, then here are some links to classes in Colorado, California, Washington), and Canada. A typical ganja yoga class lasts one to two hours, and begins by allowing students to settle into the space and then ingest cannabis in forms of smoking, vaping, and edibles which contain a mixture of both THC and CBD. Participants begin to feel a camaraderie that establishes itself with the sharing of mutual interests and the layer of each individual’s apprehensions dissolving. This produces a heady, invigorating effect that lays the groundwork for a successful yoga session.
Psychedelic Yoga Retreats and Yoga Villages
Aside from your day-to-day practice, you might be looking for a more in-depth, immersive experience. Psychedelic yoga retreats may be the answer. One sponsored by 420 Yoga Retreats in the Canadian Rocky Mountains offers three days of cannabis-yoga and meditation sessions. Other yogis may prefer a music festival setting, such as “Samsara” in Hungary, or an experience such as the Envision Festival in Costa Rica, where all art forms are integrated into consciousness-elevating events including music performances, psychedelic visuals, sound bathing, and yoga villages, and where many participants use psychedelic substances. There are also ayahuasca retreats that integrate both yoga and ayahuasca as tools to aid in healing and self-discovery. These claim to offer a powerful opportunity for lasting transformation.
Final Decisions on Psychedelic Yoga
It’s important to remember that cannabis, psilocybin, LSD, and other psychoactive substances are all tools. Your final results will depend on how you use them. Introducing any of these psychoactives into your yoga practice does not automatically lead to enlightenment, but it provides a useful utensil to further understanding. It is recommended that you always familiarize yourself with the substance you are using, and know your dose before experimenting with it in a yoga practice.
Set and setting are always critical in deterring a negative effect, which individuals who are not experienced could encounter. As always, we at The Sporestore don’t directly promote or discourage personal use of psychotropic drugs, but seek to provide the best knowledge available to help inform your decisions and responsible use.
Additional Resources
[1] O’Flaherty, W. D. (2010). The Hindus: An alternative history. London: Penguin Books.
[2] Wasson, R. G. (1971). The Soma of the Rig Veda: What Was It? Journal of the American Oriental Society, 91(2), 169-187. doi:10.2307/600096
[3]Grof, Stanislav. Psychology of the Future: Lessons from Modern Consciousness Research. Albany: State University of New York Press, 2000.
[4] Michael R. Aldrich (1977) Tantric Cannabis Use in India, Journal of Psychedelic Drugs, 9:3, 227-233, DOI: 10.1080/02791072.1977.10472053
[5] Rae Lland, “Here’s What Happened When I Did Yoga On LSD,” Reset.me, , accessed May 23, 2019, https://reset.me/story/heres-what-happened-when-i-did-yoga-on-lsd/.
Aggarwal S. K. (2013). ‘Tis in our nature: taking the human-cannabis relationship seriously in health science and public policy. Frontiers in psychiatry, 4, 6. doi:10.3389/fpsyt.2013.00006
Richert L, DeCloedt M. Supple bodies, healthy minds: yoga, psychedelics and American mental health Medical Humanities 2018; 44:193-200. https://mh.bmj.com/content/44/3/193.
Mckenna, T. (1999). Searching for Soma: The Golden Vedic Enigma. In Food of the Gods: The Search for the Original Tree of Knowledge (pp. 97-126). London: Ebury Digital.